The Revolution that Is Wide Format Printing 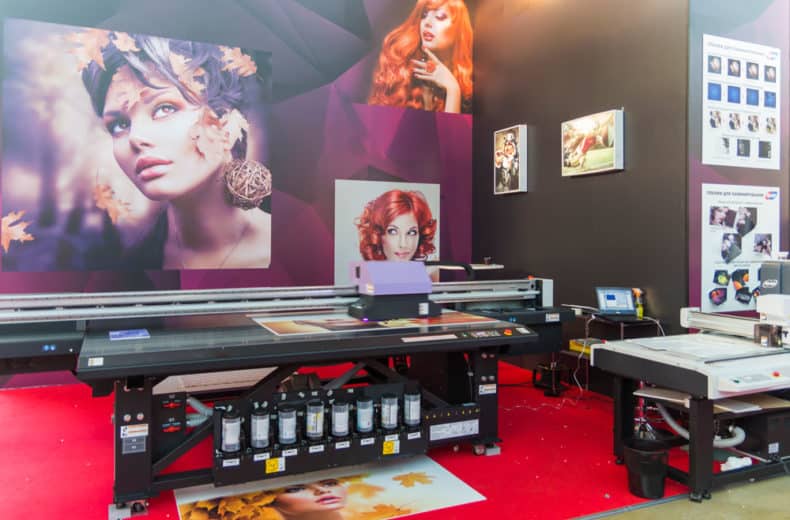 When you first saw one of those vehicles driving down the street with vivid images and print advertising some local business, you probably thought, “Wow! Those people must have spent a ton of money painting that car.”

You later came to understand what you saw was the rolling version of a technology trend that has revolutionized visual advertising in less than two decades. Wide format printing brought high-quality, large-scale visual imaging within reach for businesses large and small since its founding in the early 1990s.

Henry Wilhelm, founder of Wilhelm Imaging Research, Inc., tells the story of how rock musician Graham Nash and his road tour manager, Mac Holbert, first encountered the Iris Graphics Model 3047 inkjet printer and recognized its potential for printing large photographs. Nash and Holbert were both passionate photographers looking for a way to better display their works.

The Iris 3047, released in 1989, was developed as a graphics proof printer, so it was not designed to produce prints that would endure. But officials with Iris Graphics had been experimenting with the printer, producing reprints of photographs and even fine arts with encouraging results.

Nash and Holbert were impressed enough with the product that they purchased an Iris 3047 and opened Nash Editions in 1991 to produce high-quality photographic prints, not only for themselves but for other photographers around the country.

One issue they faced in those first years was the water-based inks were not meant to last, so the life of a print was only about 4 years. By 1994, more players were coming into the market and inks were being developed that could last upwards of 40 years.

Historians also peg the 1994 release of the Epson Stylus color printers that brought photo-quality printing to people’s homes and desktops as the event that truly launched the revolution in printing. Though the Epson printer was not available in a large-format version, it inspired a desire for less-expensive printing options and brought other large players into the game. Hewlett-Packard entered the market it 1997 and 1998 with its PhotoSmart and DesignJet printers and, more importantly, its UV inks that extended the life of prints up to 200 years.

Taking the Revolution to the Streets

While Nash, Holbert and Wilhelm were seeking solutions to art-quality photographic printing, the bigger share of the revolution was taking place in the advertising industry where graphic artists were eager to showcase their work in large formats at a cost their clients could afford.

First are the printers that print on paper, fabric or vinyl, basically any flexible material that can be put on a roll. These wide and long prints made for an inexpensive alternative for billboards, banners, wall and window coverings and others that previously needed to be done through silk-screening or hand painting, both expensive alternatives for small-batch projects.

The second type of inkjet printer is one that can print directly to rigid surfaces such as foam boards, plastic and metal. The latest versions of these industrial printers, such as the HP Scitex FB10000 Industrial Presses used by Printleaf, accommodate materials up to two inches thick.

From billboards to banners, from trade shows to car wraps, from wall murals to window clings, the revolution in wide format printing has changed the face of visual marketing in the past two decades, limited only by the imagination of graphic artists. If you have a surface to cover, or even want to create a surface where none exists now, you can do so with dynamic artwork that will call attention to your product or business.

Consult with the Printleaf experts in wide format printing to determine the best solution to your marketing needs.

Poster Like a Pro: A Designer’s Guide to Printing a Poster

Printleaf provides high end digital and offset printing services. From marketing collateral to large format prints, we are the go to destination for small and large businesses. If you are exhibiting at a trade show or event, ask about our custom apparel and promotional products.